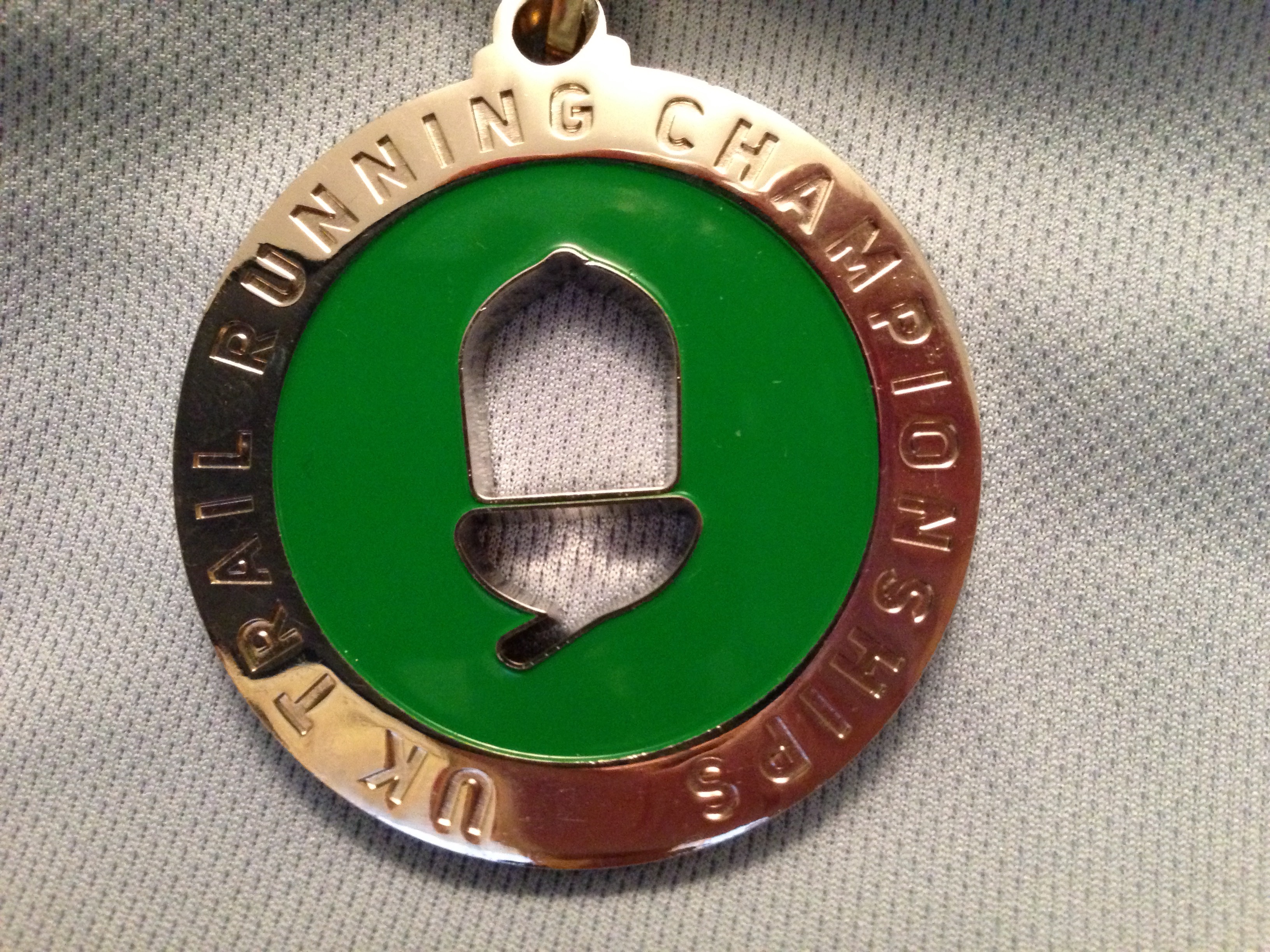 A few years ago at the 50k Fairlands Valley Challenge, I remember meeting a runner, Lindley, who was enthusiastically encouraging me to enter the Stort 30 – a new race which he had organised. Eventually, and just seven days before the start of the 2015 race, I signed up for the Stort 30: an out and back 30 mile trail race (15 each way) along the River Stort Navigation Channel in Hertfordshire.

This year the race fitted in nicely with my calendar which had me scheduled for a 30 mile training run on the Sunday. I planned to use the race as a mid distance tempo run with a goal to run even paced 7 min miles throughout. Running alongside a navigational river meant that the route would be essentially flat (slightly downhill on the way out and slightly up on the return leg) and the mix of grassy trail, harder packed paths and perhaps softer mud in parts would suit me, and this gave me confidence that this would be a great race to continue my training focus on even paced longer runs. My previous several weeks of training suggested that running at 6:59 mins/mile should make this a fairly comfortable but moderately paced run.

And this year it was also the UK Trail Running Middle Distance Championship. I have previously won the UK Trail Running Ultra Distance Championship in two different age groups in 2009 & 2014 but this was my first attempt at middle distance. I was interested to see how I stacked up against others at a distance that was less than 50k and only slightly further than a marathon.

The UK Trail Running Championship events are held across three different distances, short, medium and ultra distance and are organised by the Trail Running Association which represents trail running in association with UK Athletics.

Just before the start I bumped into Ed Catmur, a really friendly and accomplished ultra runner who I first met in 2014 racing the 3×3000 Ultra Trail and again at the Centurion Winter 100.  I’d been rooting for Ed and cheering him on from the comfort of my laptop whilst tracking him during the Dragon’s Back race earlier in the year and this morning he showed me his quite dramatic scar, the result of a fall that had forced his retirement from that race. Now at the Stort 30, Ed had raced the Autumn 100 just the weekend before and was standing a little back in the pack and so I excused myself and took a position closer to the start line, not because I was planning a fast start but simply because I prefer to run with a bit of clear space in front of me if I can.

On the line I recognised Team GB athlete Craig Holgate wearing the familiar Centurion UltraTeam vest. I don’t know Craig personally but I was aware that he had previously won some of the Centurion 50 and 100 milers as well as the UK 100km Championship and ran for our winning GB team at the World Trail Championships. Craig stood on the right hand side of the start ready to take the racing line around the first of two clockwise laps of the playing field before we would head downhill by road to join the River Stort. He looked like he meant business and I immediately picked him as my favourite for the race win. And from the gun Craig was in the lead group. On our second lap I could see that Craig and two other athletes (both wearing grey tops) had already broken free from the following runners which included three ladies. I took a conservative start, reminding myself that this was really just a tempo training run for me and my goal was to run 7 min miles for the whole 30 miles.

I still had sight of the leading three men as we headed down to the river and there were perhaps another dozen runners in front of me as well. The river soon turns this way and that and you quickly lose sight of runners as they move away from you but my last glimpse of the leading three men before they went around a bend in the river was with them still together as a very tight group but with Craig in third. All three had shot off into the distance.

Quite quickly the path became a narrower mix of grass and soft ground (from the previous night’s rain) and I found myself coming up behind other runners. Everyone in front of me was running at a great pace, many of them not much slower than my target pace and I could have easily settled in behind anyone of them had some nice company for these first few miles of the run but I reminded myself of my target pace and moved through the field. After a while I came upon first lady, Jess Gray, who was moving really well. I was running just a bit faster than her and I thought for a moment that she might tuck in behind me. She didn’t and suddenly I was all alone in the race. Mentally picturing again that group of leading runners leaving the playing fields at the start, I was pretty certain that I’d moved into 4th place. I also knew that I would be able to confirm this in about another 10 miles time at the turnaround. 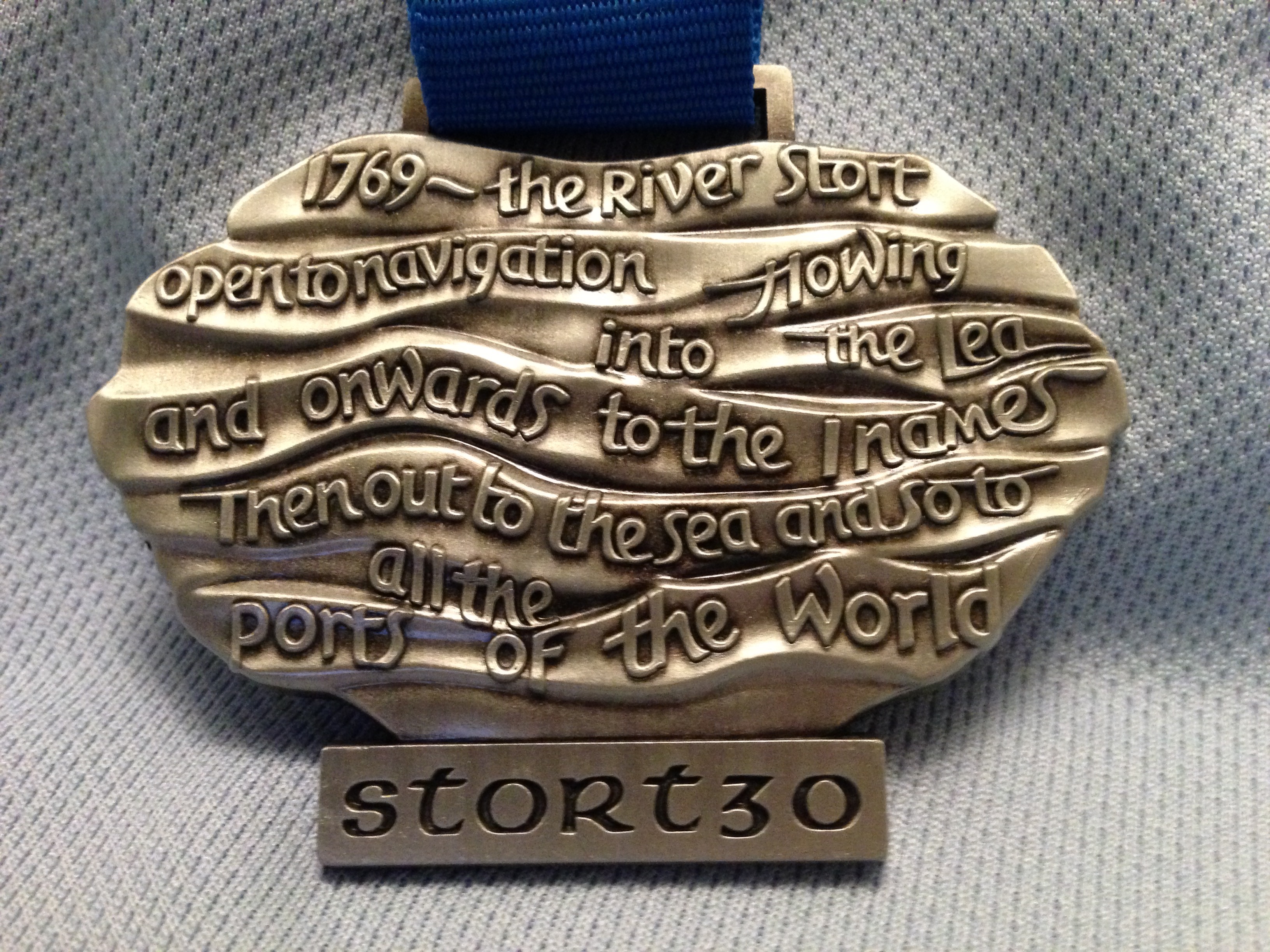 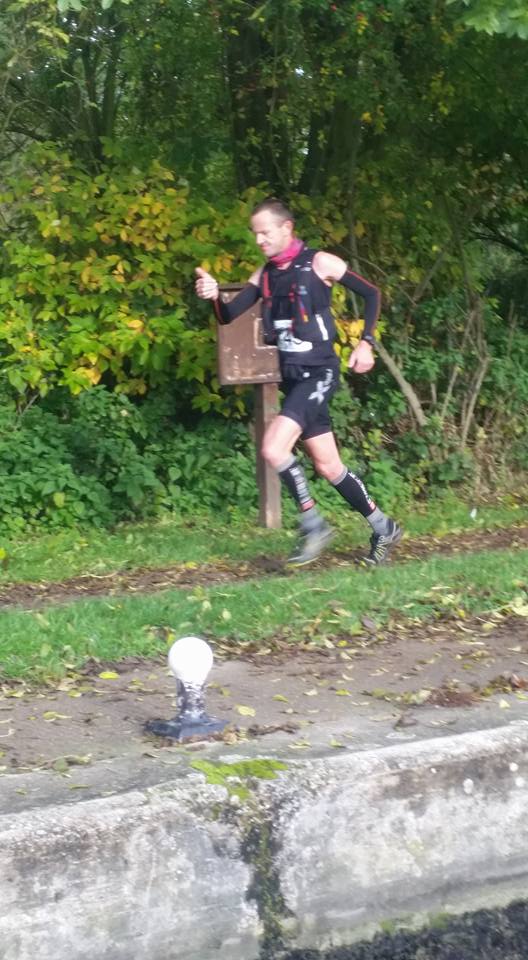 Realising so early in the race that I was lying in fourth place mucked up my race plan. Instead of an even paced training run I now became determined to see if I couldn’t land a podium finish. Unfortunately because of the windy nature of the river it was impossible to know what was happening up ahead and whether I was way behind or not and the 15 mile turnaround point was still more than 10 miles distant. So I picked up the pace. Not too much but enough that I knew it might come back to bite me in the closing miles. Here and there, in a few more open parts of the path I started to catch a glimpse of a distant runner. And every time I was spurred on to working just a little bit harder. I only needed to catch one other runner to move out of fourth place and onto the podium.

Then with less than half a mile to go to the half way point and wondering if I was nearly there yet, I looked up from my Suunto to see Craig Holgate flying towards me. He was on his own. But really not very far behind at all was second placed man who I would later learn was Paul Wathan, a Team High Terrain Events runner who had, like myself been out in the Alps at the UTMB earlier in the summer. Paul was also looking strong. No sign of third place yet. I followed the race markings and left the riverside path to cross a bridge that would bring me to the turnaround checkpoint. Still no sign of third place. I turned off the bridge and there he was coming straight towards me away from the checkpoint. He was a young lad (22 year old Samuel Anderson) and I knew immediately that I would be able to pass him on the return leg. I stopped as briefly as was necessary to get a complete refill of my water bottle and drink a cup of squash – and I was off.

Until now I hadn’t really thought much about who was behind me but running the ‘back’ leg menat that I got to see the rest of the field again. There was a fair bit of clear distance between my self and the following runners who seemed to be in pretty much the same order as when I’d last seen them over ten miles earlier with Jess Gray leading the charge and still looking in great form. The time I’d taken to refill my water bottle had temporarily put Samuel Anderson out of sight but there was no need to catch him straight away I told myself – “keep it steady, we have 15 miles to catch up”.

I was impatient and moved into third place sooner than perhaps I needed to. I had been certain at the start of this race that with moderate effort I could comfortably run 7 minute miling but equally I knew that if I continued to throw in the 6:40 miles that I caught sight of now and again on my Suunto, I would definitely struggle later. But by now my race instincts had completely taken over and I was starting to wonder if I could catch Paul Wathan in second place.  Paul had looked strong at 15 miles and not too far detached from Craig Holgate but in ultra distance races anything can happen. Winners often come from behind. Leaders can rapidly drop back through the field or even DNF. So I pushed on and on. Even so I was a bit surprised at first when I caught a glimpse of Paul still a few miles out from the finish. I knew second place was mine for the taking. Although I was now slowing and suffering and running quite the wrong side of 7 minute miling, I had made up so much ground on Paul in the last 10 miles that he had to be slowing more than I was.

Once I’d overtaken Paul, I had no fantasies about moving up the field any further. Could I catch Craig Holgate and win the race? If Craig had swum the last couple of miles up the river, he would still have had time to shower and change before I finished. 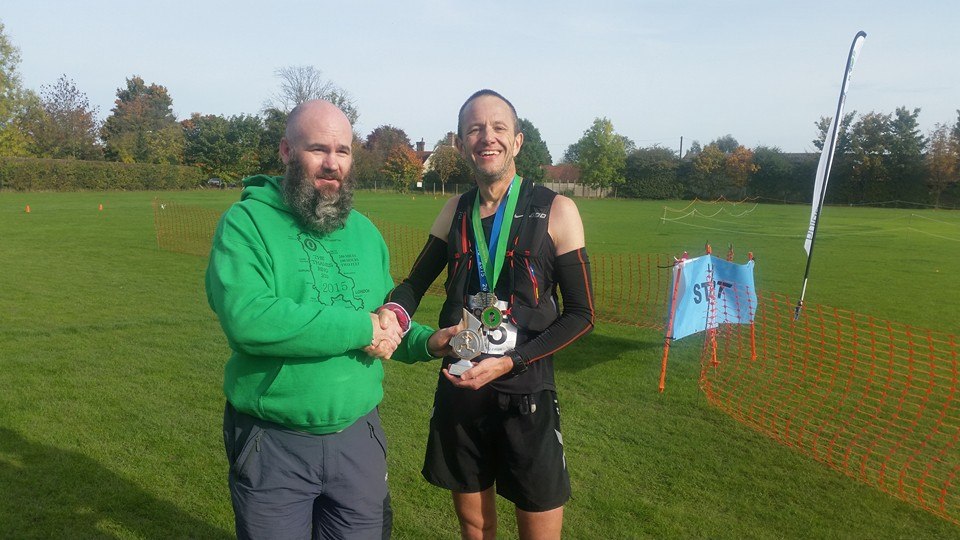 So I came second at the 2015 Stort 30 but was soundly beaten by Team GB athlete Craig Holgate who set a new course record. It was only a training run for me, so I’ll let him off 😉

Having only ever won UK Trail Running Championship events in my age group, I was absolutely delighted to win 2nd place overall and be presented with my winner’s medal by Tim Mitchell, the Chairman of the Trail Running Association and Race Director of one of my favourite races – the Ridgeway Challenge.

Interestingly if I had stuck to my race plan, I would have finished 90 seconds sooner and still have taken 2nd place. And I’m sure I wouldn’t have been quite so knackered at the finish either. But that’s racing for you. 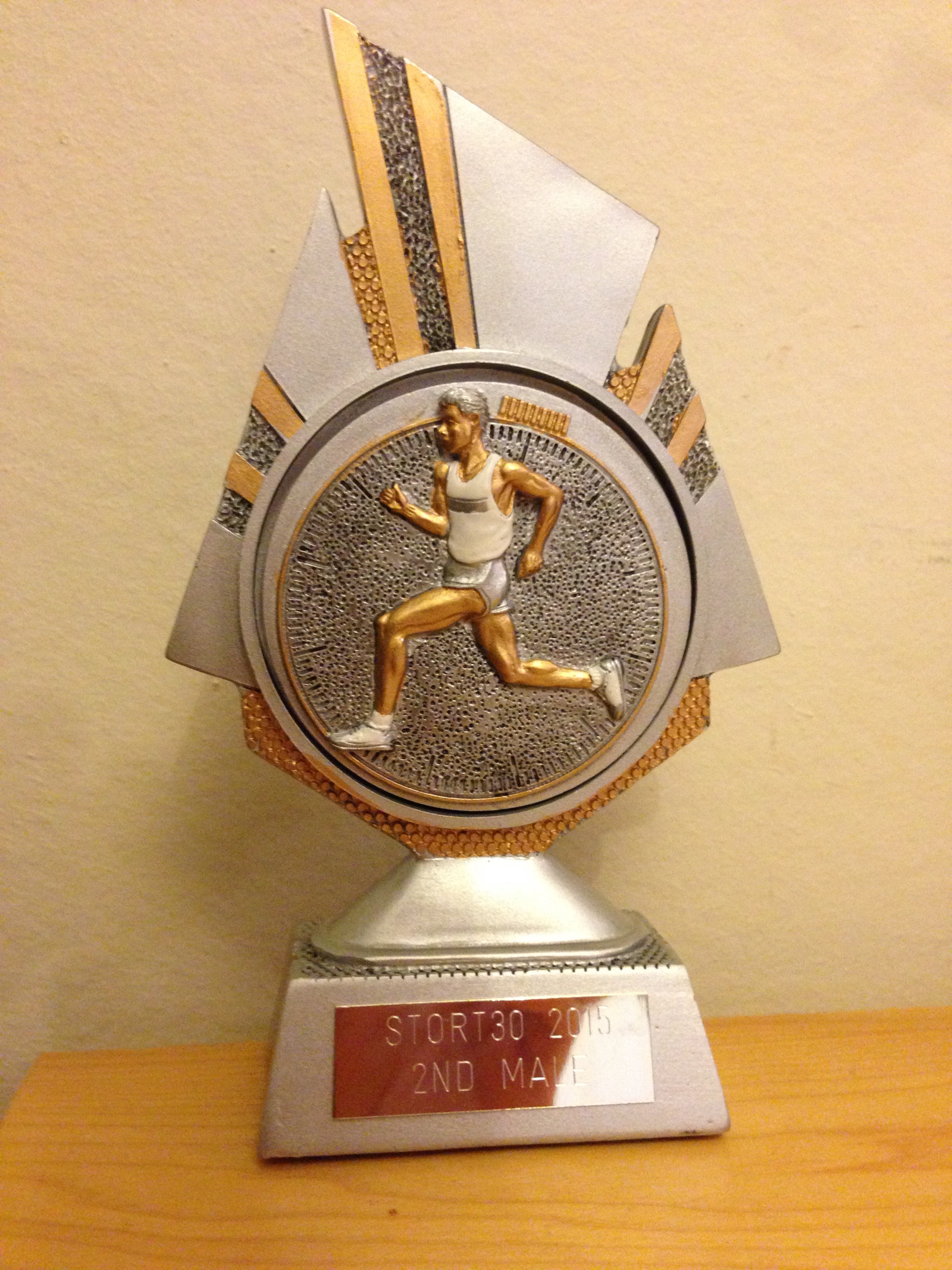 “Why didn’t I stick to my race plan?”

Would you like your very own coach? Get started! Enquire NOW